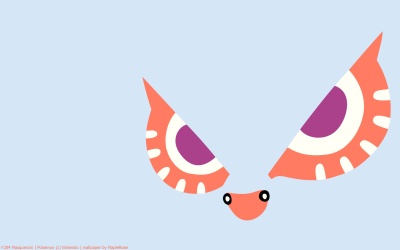 Masquerain, the Eyeball Pokémon. Masquerain is the evolved form of Surskit. Its feelers, which resemble eyeballs, help to throw off opponents. It is able to hover in the sky like a helicopter.
– May’s Pokedex

This wallpaper was requested by my friend Xns. I don’t know too much about Masquerain, I don’t think I’ve ever owned one. It looks quite interesting, like a strange butterfly.

I thought about making outlines for this wallpaper, since without it all you can see are the face from its wings and head, but ended up not doing so because it would be “incognito”, as wartjr2373 put it.