(apologies for the delay, was too caught up playing Pokemon White) 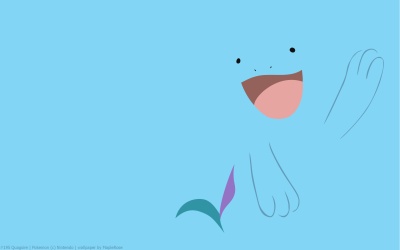 Quagsire, the Water Fish Pokémon. The Quagsire makes its home in clean freshwater lakes. The Quagsire is covered by a slippery layer of skin, making this Pokémon especially difficult to handle.
– Ash’s Pokedex

Quagsire is one of my favourite Pokemon. I love its typing and ability. Wate/Ground cancel out most of each other’s weaknesses, leaving it with only a double weakness to Grass. And Water Absorb is awesome and useful, which makes it a good double battle partner for any Pokemon with Surf. While Swampert has higher stats, Quagsire has a better ability. Appearance-wise, I like the expression on its face, it looks so happy.

My Quagsire is named QUAGLADY because she’s female. She is Impish with Water Absorb. She has Earthquake, Waterfall, Yawn, and Ice Punch (she used to have Rock Slide). She works as a general all-purpose fighter; because of her high Defense and only one weakness, she makes a good defensive Pokemon too. She’s slow, so I have her hold a Quick Claw, so sometimes she gets to go first.

I also love using her in double battles. She makes a good doubles partner with Lanturn, who has Surf and Discharge. Or with Charizard or Togekiss, where she can freely use Earthquake without hurting the partner (and the partner is fast and have advantage over Grass types)