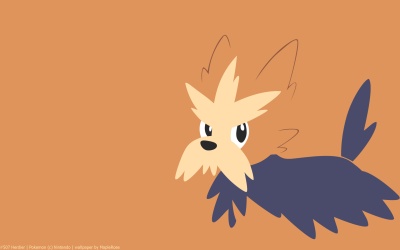 Herdier was one of the first Pokemon I had in my Pokemon White team. I caught it as a Lillipup and named him Terry. I was sad that when it evolved into Herdier, it didn’t have Pickup anymore. Instead, it got Sand Rush, which was useful on Route 4, since I didn’t take damage from the Sandstorm. But I wanted one with Intimidate, so I went and caught another Herdier with Intimidate later.

Stat-wise, Herdier is fairly fast, and has lots of Attack. Defense-wise, it’s pretty decent, esp since it only has one weakness. It has Retaliate, which is quite useful to use after another Pokemon in my party has fainted.

An interesting story about Herdier, is that when I was hunting for Vanillite in Cold Storage, I ran into a shiny Herdier. Yay! I thought, have to catch it. So I whittled it down to red HP, and was just about to throw a Pokeball next term, but before I could do that, it used Take Down on me, and killed itself… T_T At least it registered that I saw the shiny form on my Pokedex….