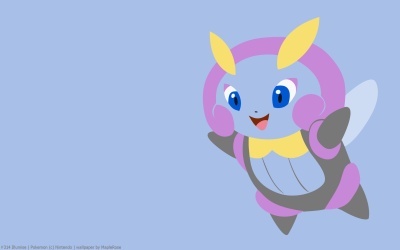 Illumise, the Firefly Pokémon. Illumise uses Sweet Scent to lure in Volbeat, having them draw geometric patterns in the sky.
– May’s Pokedex

Illumise is an all-female Pokemon species. It’s the female counterpart of Volbeat, even though the two are considered separate species. Much like the Nidoran family though, I think breeding Illumise has a chance of getting a Volbeat egg.

Even though it has wings and can fly (as seen in the anime), it’s not Flying type and does not have Levitate.

Stat-wise, it has good Speed, Sp Def and Sp Attack, but since it’s unevolved, its base stat total is only 400.