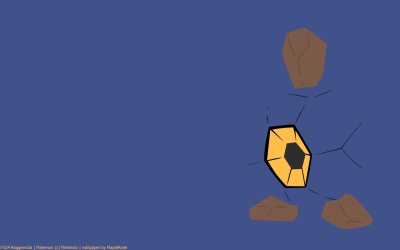 They were discovered a hundred years ago in an earthquake fissure. Inside each one is an energy core.
– Pokemon White Pokedex

Roggenrola is a sentient rock (or perhaps more like a pebble), sort of like Geodude. Although Geodude is more human-like, since it has a face and arms, whereas Roggenrola doesn’t really have any human or animal-like features. In the anime, it’s able to talk, but I can’t see where its mouth is, or where its eyes would be. I guess that dent in the middle of its body serves as a mouth?

Stat-wise, it has lots of Defense, good Attack, decent HP, and nothing else, but they’re still annoying to kill in caves because of its ability Sturdy, which means you need to hit it twice to kill it.