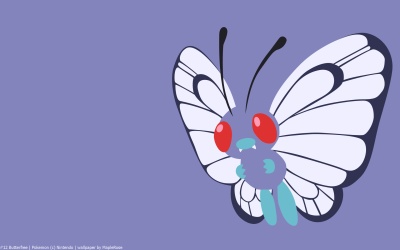 Butterfree, the Butterfly Pokémon. Butterfree is the evolved form of Metapod. The scales covering its wings help it to shed water.
– May’s Pokedex

Butterfree is the original (first) butterfly pokemon. It’s somewhat cute, despite me not liking bugs, though I think its face looks closer to Venonat’s than Caterpie or Metapod’s.

In the anime, Ash had a Butterfree, it was evolved from the Caterpie he caught, but he set it free.

Stat-wise, Butterfree doesn’t have very high stats, only 385, despite it being fully evolved. Its best stats are in Sp Attack and Sp Def, with good Speed. Additionally, its typing has a lot of weaknesses, including a double weakness to Rock.