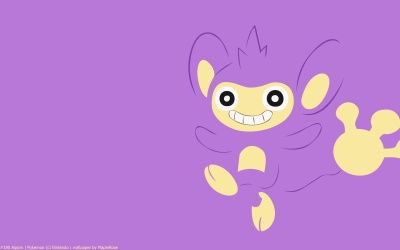 Aipom is based on a monkey with a prehensile tail. It, like many other Pokemon from Gen II, didn’t have a relative until Gen IV. It’s the only Pokemon to evolve by learning Double Hit. Its grin is kinda creepy if you stare at it for long…

In the anime, Aipom is shown to be quite mischievous; it uses its tail to steal Ash’s hat and runs away with it. It also stole aboard the ship that Ash was on to Sinnoh, because it didn’t want to be left behind when Ash left behind all of his Pokemon from Hoenn. While travelling with Ash in Sinnoh, Aipom discovered that it likes doing contests better than battling, so Ash and Dawn traded Aipom for Dawn’s Buizel, and Aipom was able to do contests with Dawn.

Stat-wise, Aipom is fast and has good Attack, but relatively poor defense. It can learn Fake Out (by breeding) and U-turn (by TM), which makes good use of its stats, and an annoying Pokemon to fight against.