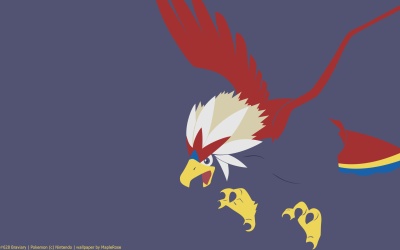 They fight for their friends without any thought about danger to themselves. One can carry a car while flying.
– Pokemon Black Pokedex

Braviary’s colouring, as well as it being based on an eagle, is the best Pokemon to represent American Independence day.

I like the pose Braviary is in for the official art and the sprites, looks like an eagle mid-swoop. It’s a male-only species, so it can only breed with Ditto, and does not learn any egg moves as a result. It has a female counterpart, Mandibuzz, but unlike the Nidoran family, the two are separate species and cannot produce Braviary eggs.

I think its Pokedex entry is exaggerating again, I don’t think an eagle can carry a car while flying, even if it’s based on sky warriors.

Stat-wise, it has lots of Attack, decent defenses, but is rather slow. It seems to be a bulkier version of Staraptor, but not as fast. As far as Normal/Flying birds go, Braviary is pretty good. It can have Keen Eye or Sheer Force as abilities, or Defiant as a Dreamworld ability. Defiant seems pretty interesting and useful (it raises the user’s Attack stat by two stages for each stat lowered by an opponent, but not by self or partner in double or triple battles). But as far as I know, it is currently impossible to get 5th gen Pokemon in the Dreamworld.