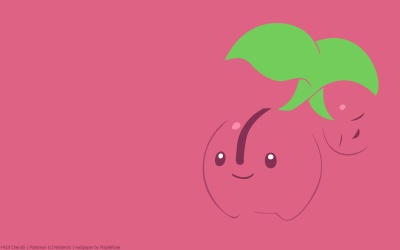 Cherubi, the Cherry Pokémon. All of the nutrients needed for evolution are contained in its small ball. Cherubi becomes redder as it is exposed to sunlight, and is almost ready to evolve once the smaller ball buds.
– Dawn’s Pokedex

Its Pokedex entries all say something about the small ball storing nutrients needed to evolve, and that it’s tasty. This is one of the few references to eating Pokemon. The Platinum dex also says Starly try to peck it off, suggesting that Pokemon eat other Pokemon. I love cherries, but the small cherry ball on Cherubi has a face on it, a rather cute-looking face (like a sleeping baby), I don’t think I could eat it… Also, the fact that it has a face on it, does it mean its small ball has a brain and is a separate entity from the other part, like Girafarig, Dugtrio, Doduo etc? The Pearl and HGSS entries say stuff about draining the energy from that ball, and it shrivels up for evolution. That seems rather cruel..

Stat-wise, its best stat is in Sp Attack. But because it’s a first stage Pokemon, its base stats aren’t that good.