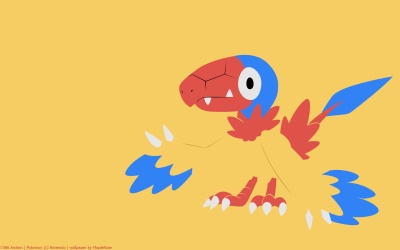 Said to be an ancestor of bird Pokémon, they were unable to fly and moved about by hopping from one branch to another.
– Pokemon Black Pokedex

Archen is one of the Gen V fossil Pokemon, revived from the Plume Fossil. Despite being part Flying, it cannot learn Fly until it evolves (which was sort of annoying, because I needed a Pokemon that could learn Fly), probably due to what its Pokedex entry says.

I had an Archen (it’s an Archeops now). I restarted many times to get an Adamant one, haha.

Archen’s ability Defeatist is a hindering ability, due to its high base stats (401 total, high for a first-stage evolution Pokemon), high Attack, Sp Attack and Speed. Defeatist halves the user’s Attack and Special Attack stat when its HP is at or less than half of its maximum.