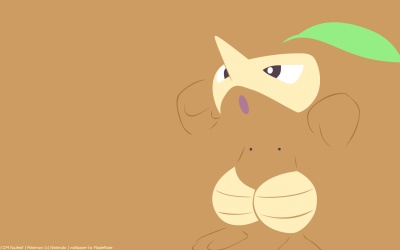 Nuzleaf, the Wily Pokémon. Nuzleaf can be found living in thick woodlands. The soft melodies they play on their leaf pipes are said to comfort humans.
– Ash’s Pokedex

Nuzleaf is the first Grass/Dark type in National Dex order, and it shares its typing only with its evolution Shiftry. It’s unique, but not all that great. It has 6 weaknesses, including a double weakness to Bug.

Even though its Pokedex entries say things about its grass flutes, it can’t learn Grass Whistle. Its design reminds me of Pinocchio, but it also looks like a Pikmin, especially since its shiny sprite has red instead of tan for the face and legs (which also makes it look rather sunburnt). And you know, I never noticed that Nuzleaf has nipples. But now I cannot unsee that, haha.

Anyway, stat-wise, it has good Attack, Sp Attack and Speed, at the expense of poor Defenses.

Nuzleaf is the unofficial mascot of the Nuzlocke challenge, where people play Pokemon using a set of self-imposed rules to make the games more challenging. Rules usually involve releasing a Pokemon if it faints, and catching the first Pokemon encountered in a new area.