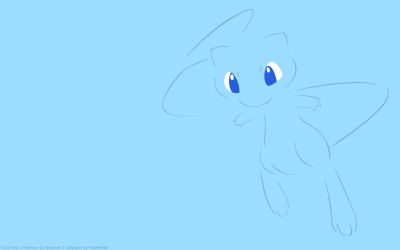 Because it is able to use every move, there are many scientists who believe that it is the ancestor of all Pokémon.
– Pokemon Black/White Pokedex

I just finished playing PokePark Wii (Pikachu’s Adventure), where Mew is the final “boss”, so today’s Pokemon is Mew.

Mew is the original event Pokemon. It was a secret Pokemon in Red/Blue. I got a Mew in HeartGold/SoulSilver from one of the events. It sort of looks like a skinless cat. I find it kind of cute, but at the same time, its skinless cat-ness kind of turns me off.

Mew is the “New Species” Pokemon, despite the fact that it’s said to be the ancestor of all Pokemon. It is capable of learning every single TM, HM, and move tutor moves (‘cept some Pokemon-exclusive ones). It can also learn Transform, which can be learned (other than Sketch) by one other Pokemon, Ditto.

In the anime, Mew was featured in the first movie, as well as the 8th movie. But it wasn’t really the main character in either movie. Unlike many other legendaries, Mew doesn’t really interact with Ash and his friends all that much.

Stat-wise, since Mew is a legendary, it has 100 in every stat. Combined with the fact it can learn almost every move, it’s a very versatile Pokemon. Despite that though, Smogon has put Mew into Underused tier in Gen V (even though it was in Uber in Gen IV).