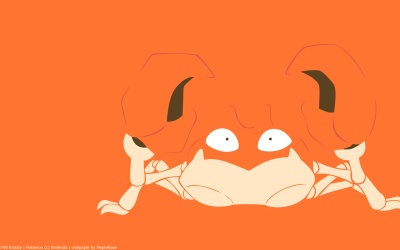 Krabby. Lives near the shore. Its average height is about 16 inches.
– Ash’s Pokedex

Krabby is simply based on a crab, it’s one of the more realistic (ie it looks like the animal it’s based on) designs for Pokemon, though crabs are only that colour when they’re cooked. Its Japanese name is simply “crab”. In the anime, and the game PokePark Wii, Krabby walks sideways, like real crabs do. Instead of saying their name like most Pokemon do, Krabby goes “kooky kooky”.

Ash had a Krabby in the anime, which he didn’t use much. But he did use it for the tournament, and it evolved after one battle.

Stat-wise, Krabby has pretty good Attack (especially for a first-stage evolution Pokemon), and decent Defense, but has poor HP, Sp Attack and Sp Defense. It had a signature move, Crabhammer, which for some reason is a Water type move, probably because Krabby is water type.