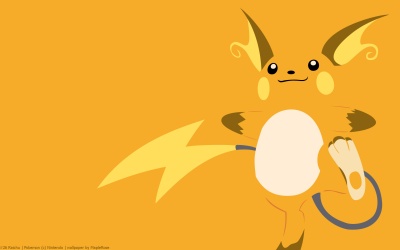 Raichu, a Mouse Pokémon of the Electric element. Raichu is the evolved form of Pikachu. It can shock with more than 100,000 volts, enough to render a Dragonite unconscious
– Ash’s Pokedex

Raichu is the evolved form of Pikachu, aka the Pokemon that Ash’s Pikachu will never become (though it almost evolved before fighting Brock I think). I personally like Raichu more than Pikachu, but it may be due to the fact that I think Pikachu is overrated XD I like Raichu’s uniquely-shaped ears, and Raichu’s tail, which looks like an electric cable, and looks to be quite flexible. It’s quite huge compared to Pikachu, though it somehow lost fingers when it evolved from Pikachu.

Raichu is Lt Surge’s signature Pokemon, yet Ash’s Pikachu was somehow able to defeat it.

Stat-wise, it’s fast, and has decent Attack and Sp Attack, though its defenses kind of suck. Despite its anime Pokedex, its shock is only neutrally effective to Dragonite. Though in Gen V, it can get the ability Lightningrod from the Dreamworld, and with Gen V’s revamp of Lightningrod’s effects, Raichu is able to boost its Sp Attack if hit by an Electric move.