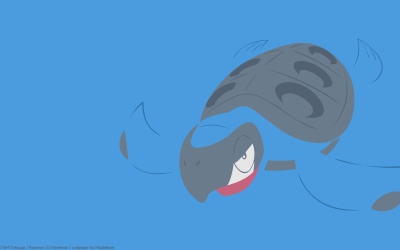 Restored from a fossil, this Pokémon can dive to depths beyond half a mile.
– Pokemon Black Pokedex

Tirtouga is one of Gen V’s fossil Pokemon, being resurrected from the Cover Fossil. I always picked Archen over Tirtouga though. Its typing of Water and Rock is nothing new, but unlike the Rock/Water of Omanyte and Kabuto, Tirtouga is Water/Rock. In fact, Tirtouga and its evolution is the only fossil Pokemon to have Rock as a secondary type, though it seems that primary and secondary typing doesn’t really come into play in battle mechanics

Stat-wise, it has very good Defense but poor Sp Defense, and good Attack. It’s also really slow, so it’s a more defensive Pokemon than offensive one. Its abilities Sturdy or Solid Rock are useful for defending.