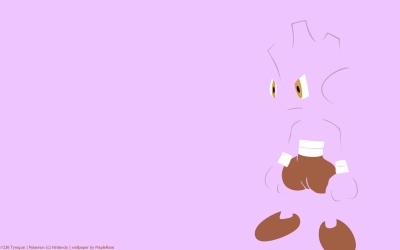 To brush up on its fighting skills, it will challenge anyone. It has a very strong competitive spirit.
– Pokemon Crystal Pokedex

Tyrogue is the only Pokemon other than Eevee able to evolve into more than 2 Pokemon. It’s considered a baby Pokemon, therefore cannot be bred. Tyrogue is the Pokemon that links Hitmonlee and Hitmonchan as revolutionary relatives, starting in Gen II. It’s a male-only Pokemon, looking like a rough kid (with the mohawk and bandages and all). In Gen II (and remakes), you’re given a Tyrogue in Mt Mortar as a gift. Though since it cannot breed, you’d have to evolve it first before breeding it (to evolve it into a diff evolution, for example, to complete the Pokedex).

Tyrogue’s pants used to be more red. But in the anime, it looks brown. And starting in HGSS, the pants are changed to be more brown than red.

Stat-wise, Tyrogue has 35 in each stat, and you’d have to mold it (EV training for example) to meet the conditions for each evolution. Tyrogue’s evolutionary method is unique (though kind of annoying, especially since you can only catch high-leveled Tyrogue in Black/White). After level 20, it becomes Hitmonlee if Attack > Defense; Hitmonchan if Defense > Attack; and Hitmontop if Attack = Defense (which is probably the hardest to do.