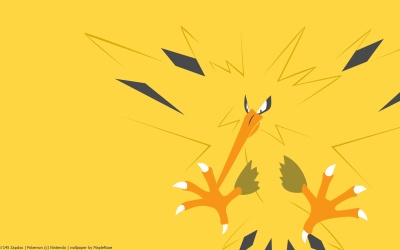 Zapdos, the Electric Pokémon. Zapdos has both electric and flying elements and the flappage of its wings can create lightning.
– Ash’s Pokedex

Zapdos is the second (in dex order) of the legendary bird trio. It’s the master of Electricity (its Pokemon species is its type). It’s the first Electric/Flying type (and the only one til Gen V). Its typing is pretty good, Flying give immunity to Electric’s only weakness to Ground, leaving it only weak to Rock and Ice. Type-wise, it’s the only one of the birds not doubly weak to Rock. Also type-wise, I think Zapdos is the most advantageous of the three, because it has advantage over both Articuno and Moltres, but only weakness to Articuno. The other two birds only have advantage over one other bird.

Design-wise, I like its colour scheme. It’s rather pointy-looking. It’s also quite huge, the height of a person. I like its English name much better. Its Japanese name is just “Thunder” (almost like Jolteon’s Japanese name of “Thunders”)

Stat-wise, due to being a legendary, its stats on average are pretty high. It has great Sp Attack and Speed, but pretty good Attack as well. Its movepool is somewhat limited in terms of type coverage, but two good STAB moves with its stats would make it pretty powerful. Its Dreamworld ability is Lightningrod, which, with the modification to the mechanics of Lightningrod in Gen V, makes it even more useful. It would be immune to Electric attacks (useful to counter Thunderwave especially), as well as raise its Sp Attack by one stage (and protect teammates from single-target Electric attacks in double and triple battles).