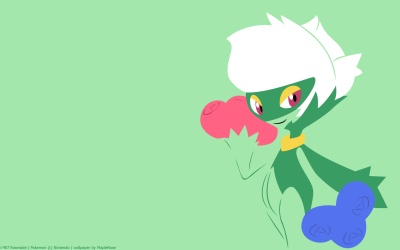 Roserade, the Bouquet Pokémon. Roserade is the evolved form of Roselia. It lures enemies with its sweet aroma, and attacks with dancer-like elegance.
– Ash’s Pokedex

Roserade is one of the two fully evolved 3-stage evolution Pokemon that’s legal to get at level 1 (the other is Porygon-Z), because breeding for Budew is optional (you can get a level 1 Roselia), and evolving Roserade to Roselia doesn’t require leveling.

Despite it based on a rose and looking rather feminine, Roserade is 50% male.

Roserade is a really good offensive Pokemon. It has high Sp Attack (the highest of all Grass types, tied with Exeggutor), good Sp Defense, and good Speed. However, it has low Defense, making it somewhat of a fragile cannon. Both of its abilities can be useful; Poison Point somewhat counters its low Defense, but Natural Cure is probably better. It gets Technician from the Dreamworld, which can be useful as well, since it can power up Magical Leaf. Though Energy Ball is probably superior anyway.