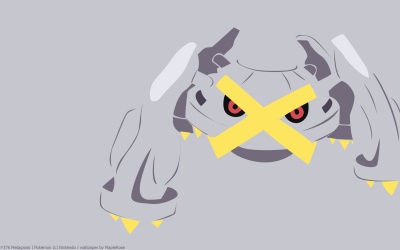 Metagross, the Iron Leg Pokémon. With its four brains, it has an intelligence rivaling a supercomputer.
– Dawn’s Pokedex

Metagross! Its name is pretty badass-sounding. Its name is the same in English and Japanese. Metagross is considered a pseudo-legendary Pokemon due to its high stats. It’s one of the few non-Dragon type pseudo-legendaries, and the only genderless one. And it’s the heaviest non-legendary Pokemon. Its Steel/Psychic typing is pretty good defensively, with only 2 weaknesses, and a whole bunch of resistances and an immunity.

Dawn’s Pokedex entry says it has four brains, I wonder if those four brains are in its main body part, or if they’re in the legs (one in each leg). Its eyes and the X over its face kinda looks like an old man to me for some reason, haha.

Stat-wise, it has very high Attack (the highest of Steel type and non-legendary Psychic type), and high Defense. Like most Steel types, it’s relatively slow, but it learns Agility by level-up, which can offset its slow speed.