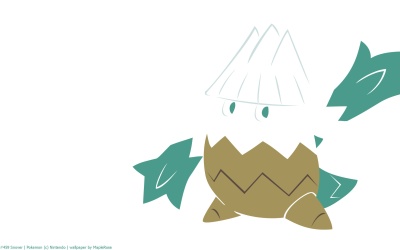 Snover, the Frost Tree Pokémon. Snover live mainly on snowy mountains with little human contact, but are known to approach people out of curiosity.
– Ash’s Pokedex

I’m putting up Snover today because we got a rather unexpected snow storm today. When I went to work this morning, it was clear, and there was no sign of snow. At around 10, it started snowing like crazy. By noon there was about half a foot of snow on the ground. It kept on snowing on and off in the afternoon. Someone probably brought out their Snover that had Snow Warning.

Snover’s type of Grass/Ice is unique to its family. It’s not the greatest combination, in fact, it’s one of the Pokemon with the most weaknesses, including double weakness to Fire. It is resistant to 4 very common types though.

According to the anime, Snover can grow sweet delicious edible berries on its midsection. This is never part of the games, and the berries, called “Snoverberries” aren’t in the games either. There’s a slight difference in colouring between male and female Snover; the female’s middle section is white while the male’s is brown. Unless requested, I don’t feel the difference is significant enough for me to make an alternate version.

Snover’s stats are pretty even, its Attack and Sp Attack are the same, making it able to use both physical moves like Razor Leaf and Wood Hammer, and special moves like Blizzard and Icy Wind well. Its Speed is its lowest stat. What’s most useful about Snover is probably its ability Snow Warning, which summons Hail that lasts for the whole battle unless the weather is changed.