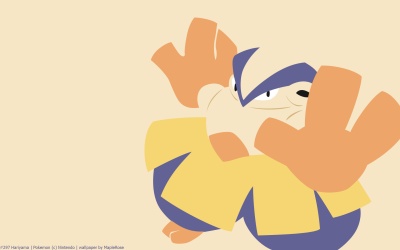 Hariyama, the Arm Thrust Pokémon. Hariyama is the evolved form of Makuhita. When tensing its body, its muscles become hard as stone.
– Ash’s Pokedex

Hariyama is based on a sumo wrestler, which is probably why it’s so fat, haha. Its face is rather flat, and I wonder if there’s a mouth down there. I had a Hariyama on my Emerald team, and it was pretty useful both offensively and defensively (with its massive amount of HP).

Stat-wise, it has high HP, the highest of all Fighting types. It also has good Attack, but poor Speed. Although my Hariyama had Fake Out, which was helpful. One of its abilities is Guts, which raises Attack when statused, so it’s quite helpful, especially because it doesn’t take the Attack cut from a Burn. Like many Fighting type Pokemon, Hariyama (and its pre-evolution) has a couple of signature moves, Arm Thrust (though in Gen V Pignite and Emboar can also learn it) and Smelling Salt (though others can learn it be breeding).