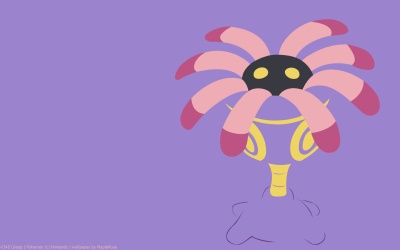 Lileep, the Sea Lily Pokémon. Lileep is believed to affix itself to stones on the ocean floor, and uses its petal-like tentacles to catch prey.
– Ash’s Pokedex

You know, for the longest time, I thought those yellow circles on its body were its eyes, and the “flower” part is the hair. But I think its actual face is in that black void inside the “cup”, with the “petals” surrounding its face. It’s kind of like Kabuto in that sense, its actual face is never seen.

Anyway, Lileep is one of the fossil Pokemon in Gen III. Its family is the only Grass type fossil Pokemon. Despite Grass and Rock having the most weaknesses, when combined, Lileep only has 4 weaknesses since a lot of Rock and Grass’s weaknesses and resistances cancel out.

I remember the first time I saw Lileep, it was in the battle tower in HeartGold, when I wasn’t familiar with all the Pokemon, especially Gen III since I haven’t played it yet. And I remember thinking “what the heck is that??” I think I figured out the Grass type ’cause it looks like a plant, but the Rock type eluded me.

Stat-wise, Lileep has good Defenses, and is rather slow, quite typical of Rock type Pokemon. It has higher Sp Attack than Attack, which is suited to its level-up moveset, although it’s probably more useful as a defensive Pokemon.