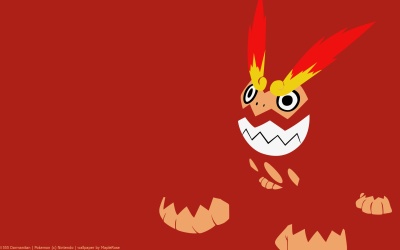 Darmanitan, the Blazing Pokémon, and the evolved form of Darumaka. Darmanitan switches from Standard Mode to Zen Mode when it has little energy left.
– Ash’s Pokedex

I had a Darmanitan in my Pokemon White game. It served as my Fire type, but also had a Fighting move for coverage. It served me well, I think it was my only Pokemon left when I finished battling Ghetsis.

Darmanitan normally has the ability Sheer Force, but in the Dreamworld, gets Zen Mode. There are actually a couple of Zen Mode Darmanitans in the Desert Resort that you can catch if you have Rage Candybars after you finish the game. Zen Mode is kinda gimmicky. When Darmanitan is down to half health, it goes into Zen Mode, and becomes Fire/Psychic, the only other Pokemon with that type is Victini.

Stat-wise, normally it has very high Attack (highest of all Fire types), good HP, and decent Speed. In Zen Mode, it reverses; it has high Sp Attack instead (the highest of non-legendary Psychic types actually). Its Defenses increase but Speed decreases. Raising a Zen Mode Darmanitan is kinda weird, because it would have good Sp Attack and Attack depending on the situation, so it would need both special and physical moves.