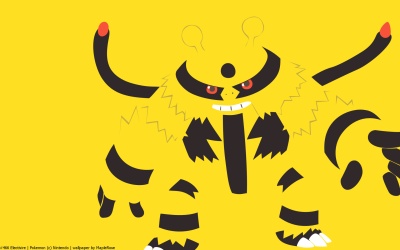 Electivire, the Thunderbolt Pokémon, and the evolved form of Electabuzz. When Electivire attacks, it pushes the tips of its two tails against its opponent.
– Ash’s Pokedex

Electivire looks kinda mean, with that nasty-plotting smile on its face and its hand reaching out as if to grab small children, haha. It’s quite wide/fat, or maybe just really really furry. There’s an outlet-shaped mark on its back, which connects to its wire-like tail thing.

It evolves by trading while holding its exclusive item the Electirizer, which has no purpose other than enabling Electabuzz to evolve. It’s the counterpart to Magmortar.

Stat-wise, it has the highest base stat total of non-legendary Electric type Pokemon. Most of it is in its Attack, but it has good Speed and Sp Attack as well. Its defenses, like most Electric types, are relatively poor. Its ability Motor Drive is useful for switching into Electric attacks, while boosting its Speed. It can learn Fire, Ice, and Thunder Punch, making it quite versatile in type coverage. Gen V gave it a higher-powered physical move in Wild Charge. Electivire is one of the few Pokemon to learn Giga Impact by level-up.