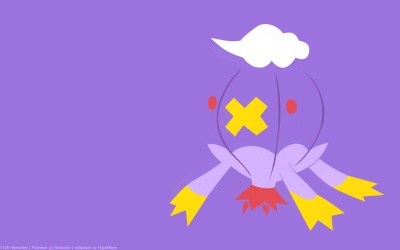 Drifblim, the Blimp Pokémon and the evolved form of Drifloon. Because it travels on wind currents, Drifblim’s movements are unusual and unpredictable.
– Dawn’s Pokedex

Drifblim is based on a hot air balloon. It’s the only fully evolved Ghost/Flying type. Ghost/Flying isn’t a bad type, since it has 3 immunities, the most a Pokemon can have with typing alone. But Ghost and Flying don’t really cover each other’s weaknesses either (though it is 4x resistant to Bug).

In Diamond/Pearl, due to the lack of Fire types in the regional Pokedex, Flint of the Elite Four has a Drifblim despite being a Fire type trainer, probably because of the hot air and fire connection. Its only Fire type attack was Will-o-Wisp.

In the anime, Ash fought Fantina’s Drifblim and lost a couple of times, due to Drifblim always using Hypnosis to put Ash’s Pokemon to sleep.

In the Pokepark games, Drifblim is used to transport you from area to area. Though its Pearl Pokedex entry says “It carries people and Pokémon when it flies. But since it only drifts, it can end up anywhere” making it sound rather unsafe and unreliable to fly by. It can learn the HM for Fly in the games, so you could Fly by Drifblim, despite its limbs looking too fragile to be able to carry a trainer (though you can also fly on a Pidgey, so it’s not that big of a stretch XD).

Stat-wise, Drifblim has a lot of HP (the highest of Ghost and Flying types). It also has decent Attack, Sp Attack and Speed, but not a lot of Defense or Sp Defense. However, it learns Stockpile by level-up, and can raise its defenses. It also learns Baton Pass by level-up, so it can potentially pass on its Defense boosts to another Pokemon. Drifblim gets the ability Aftermath or Unburden (which was its signature ability in Gen IV when it was introduced). Both have its uses, though Aftermath’s effects only come into play for certain circumstances, and I think Unburden is more useful; you can give it a berry, and after eating the berry, Drifblim’s Speed would double (which it can either use to attack, or Baton Pass). One of the strategies is to use a Salac Berry, combined with Unburden’s Speed boost, it can outspeed pretty much anything, and then use Explosion (since Drifblim would have low HP at that point anyway).

Its Dreamworld ability is Flare Boost, an ability exclusive to Drifblim’s family. It raises Sp Attack by 50% when burned, so it could be quite useful as an offensive Drifblim.