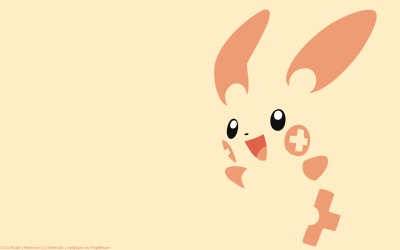 Plusle, the Cheering Pokémon. Plusle loves to cheer for its fellow Pokémon, and it creates sparkling pom-poms by shorting out the electrical current released from its palms.
– Ash’s Pokedex

Plusle is one of the cute Electric rodent of Gen III (there’s at least one in every Gen). It’s the counterpart to Minun, even though the two aren’t related. In RSE it appears in trainer battles in double battles paired up with Minun. It’s funny though how sometimes both Plusle and Minun use Helping Hand trying to help each other.

In the anime, a Plusle (along with Minun) played a pretty big role in the Destiny Deoxys movie. In DP, it was one of the Pokemon responsible for Dawn getting her nickname when she was young, and from then on she was afraid of Plusle and Minun.

Stat-wise, it has good Speed and decent Sp Attack. It could be useful in competitive play because it learns Nasty Plot, Agility, and Baton Pass, but it’s often too fragile to be alive long enough to pass on its stat boosts.