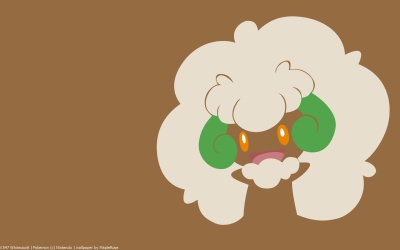 Like the wind, it can slip through any gap, no matter how small. It leaves balls of white fluff behind.
– Pokemon Black Pokedex

Whimsicott is probably best known for making good use of its ability Prankster (introduced in Gen V), making it really annoying to face, but quite useful on your team. The fact that it’s so light and based on a cottonweed makes me think it should be part Flying (like Hoppip family). It evolves from Cottonee with a Sun Stone.

In my Nuzlocking Black game, I had a Whimsicott. It was vital to my team. It has the Prankster ability, which makes all status moves priority moves. Its moveset consisted of Leech Seed, Stun Spore, Charm, and Giga Drain; it had Poison Powder at one point too, which was quite useful as well. Leech Seed and Giga Drain helped heal, and Stun Spore and Charm helped to cripple the opponent. I considered having Cotton Guard (raises Defense by 3 stages) on it, but decided to go with Charm (lowers opponent’s Attack by 2 stages), because then I could switch in and not worry about losing the stat boost.

I remember fighting a Whimsicott once that had Substitute, Protect, Leech Seed, and Toxic. It’s a pretty annoying moveset, though easily crippled by Taunt, or with a Grass/Poison type.

Stat-wise, it’s quite fast, and has decent Defenses, though its typing isn’t great, which is why all the status moves are so useful. It can learn Hurricane by level-up (it actually learns more moves by level-up than most Pokemon that evolve by stone), one of the two non-Flying Pokemon to learn it (the other being Volcarona). It’s weird that it learns Mega Drain as a Whimsicott, but Giga Drain as a Cottonee.