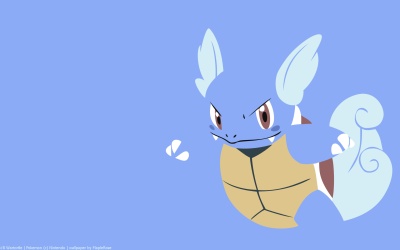 Wartortle, the Turtle Pokémon. The evolved form of Squirtle. Its long furry tail is a symbol of its age and wisdom.
– Ash’s Pokedex

Wartortle is the mid child of the Kanto Water starter. It’s actually my favourite of the evolution family by design. I like its wing-like ears and the fluffy wave-like tail, as well as its determined look.

In the anime, May had a Wartortle, which she used in contests. But Ash’s Squirtle never evolved.

Stat-wise, it has good Defenses, and decent Attack and Sp Attack, but low Speed (since it’s based on a turtle/tortoise).