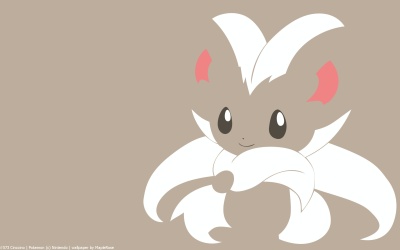 Their white fur is coated in a special oil that makes it easy for them to deflect attacks.
– Pokemon Black Pokedex

Cinccino looks so elegant, wrapped up in its scarf-like fur and tails. It’s the shortest fully evolved Pokemon (tied with Linoone) at only 1’8″ (0.5m).

Stat-wise, it’s quite fast with base 115 Speed. It has decent Attack as well, but at a cost of poor Defenses. One of its abilities, Technician, is quite useful on Cincinno, since it learns many multiple-hit moves like Tail Slap (its family’s signature move), Bullet Seed, and Rock Blast, all of which get 1.5x power boost. All of those multi-hit moves got a power boost in Gen V, from 10 to 25. So Tail Slap’s base power is likely to be 75 or 112 (hit 2 or 3 times) but can also be 150 or 187 (hit 4 or 5 times). Its 3 choice of multi-hit moves gives it good type coverage as well. Unfortunately Cinccino is weak to the Fighting priority moves, and its poor defenses can’t stand up to the higher powered ones like ExtremeSpeed or Sucker Punch. But other than that, it’s a solid physical sweeper.

Its Dreamworld ability Skill Link makes all the multi-hit moves always hit 5 times. So all of its moves would get 125 base power (since it doesn’t get the Technician boost anymore). So on average, Skill Link is better, but Technician can be more powerful 25% of the time.