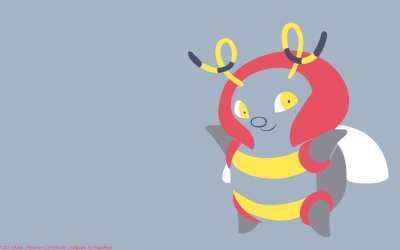 Volbeat, the Firefly Pokémon. Volbeat uses the designs on its tail for sketching and communicating with other Volbeat.
– Ash’s Pokedex

Volbeat seems to be related to Illumise (like the male version or something), but it’s not, like many of Gen III’s counterpart but not related Pokemon. Though in Gen V, if you breed Volbeat with a Ditto, there’s a chance of getting an Illumise egg. It’s a male-only species. It looks rather human-like, thus being in the Human-Like egg group. Despite having wings and based on a flying bug (firefly), it’s not part Flying nor does it have Levitate, so it’s not immune to Ground type moves.

Volbeat is the only Pokemon to learn Flash by level-up, being based on a firefly and all, though I’m not sure why Illumise doesn’t learn Flash by level-up as well. Stat-wise, Volbeat is average. It has decent Speed, and more Attack than Sp Attack. It learns mostly special moves by level-up though, especially its STAB bug moves. However, it does learn Tail Glow (one of the two Pokemon to learn it), which used to raise Sp Attack by 2 stages, but changed to 3 stages in Gen V, making it a very fast stat boosting move, and it makes Volbeat’s Sp Attack viable. And Volbeat gets Prankster in the Dreamworld, making it able to boost better. It also learns Baton Pass, which benefits from Prankster as well. So Volbeat actually makes a pretty good support Pokemon, being able to pass a +3 Sp Attack boost.