In honour of the announcement of the Hoenn remake, here’s Mega Gardevoir, plus shiny version ’cause it looks cool. 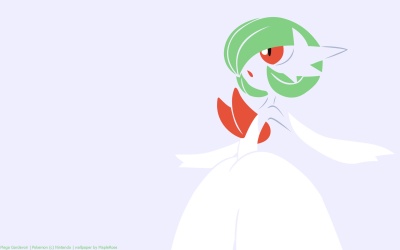 To protect its Trainer, it will expend all its psychic power to create a small black hole.
– Pokemon X Pokedex

Mega Gardevoir is Champion Diantha’s signature Pokemon. Its “dress” turns into a ball gown. Yet despite the emphasized dress, Gardevoirs are still 50% male (I guess like how frilly girly Sylveon are mostly male).

Its new Fairy secondary typing offsets its weaknesses to Bug and Dark, though at a cost of being weak to Steel and Poison.

Mega Gardevoir is one of two Pokemon to have the ability Pixilate, which turns Normal Moves into Fairy moves, and gives 30% boost. This means that a Hyper Beam from Mega Gardevoir would have 195 base power, plus 1.5 boost due to STAB, coming off its 165 Sp Attack, would destroy pretty much anything.