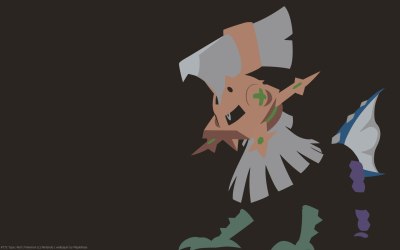 Due to the danger that this synthetic Pokémon may go on a rampage, it wears a control mask to restrain its power.
– Pokémon Moon Pokédex

Type: Null is the only Pokemon with a : in its name. It’s a strange Pokemon, in that it cannot breed, but can evolve. You also only get 1 (as a gift) per game. Is it considered a legendary Pokemon? I needed 2 Type: Nulls for my living Pokedex (one to stay as Type: Null, one to evolve into Silvally), so I actually played through Sun twice for it. (but then Ultra Sun/Moon came out and you can get another one from there)

Despite it being able to evolve, it has pretty high stats; All its stats except Speed is 95. When it evolves into Silvally, only its Speed changes to 95.