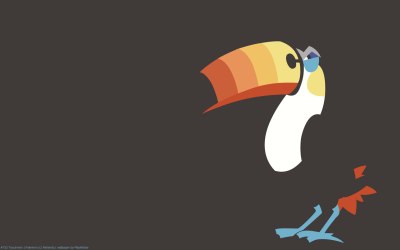 When it battles, its beak heats up. The temperature can easily exceed 212 degrees Fahrenheit, causing severe burns when it hits.
– Pokémon Sun Pokédex

Toucannon is the fully evolved bird Pokemon of gen 7. It always looks as if it’s displeased with you, due to its squinting eyes. Its beak makes it look pretty top-heavy.

Its Pokedex entries talk about how it’s able to heat up its beak to explosive temperatures, but it’s just Normal/Flying and not Fire type. It doesn’t learn any Fire moves by level up but does learn some by TM and tutor; they’re more heat-based moves rather than flame-based ones.

Its signature move Beak Blast is a 100 power physical Flying move that can cause a burn; it’s a decreased priority move, and if the opponent makes contact with Toucannon during the charging phase, it will get burned.